Five-hundred and fifty odd years since the first Renaissance, Italy is in the grip of another. This time, the rebirth is in the wine industry where, particularly here in Tuscany, producers are rediscovering old grapes and old techniques to produce some truly amazing bottles.

Couple this movement with a younger generation of passionate and talented vignerons and you have a marriage made in the vineyard. Finally, after many years of relative disappointment, Tuscany’s unique and ideal terroir and climate are being exploited to their best potential.

One such vigneron is Stefano Amerighi, who I recently had the pleasure of visiting on his estate, about twenty kilometres outside the now legendary town of Cortona. He comes from an agricultural family and feels that modern techniques are not only less suited to producing great wine than those of the previous generations, but that also they are non-sustainable in the modern world. It was this that drove him to create his seven hectares of vineyards using natural techniques and to follow an older, style of farming: one that connects to the earth and the environment around us.

In order to achieve this, Stefano decided to adopt a biodynamic method, a sort of proto-organic style of farming based on principles of agriculture that were first laid down in 1924 by the Austrian mystic, philosopher, educator, social reformer, architect, and all-round Renaissance man, Rudolf Steiner.

Steiner’s principles were heavily influenced by his philosophy known as anthroposophy. He believed in the existence of an objective spiritual world, which could be experienced through inner development in a scientific way. The end result is an agriculture which is seen as part of an interconnected system, with a strong emphasis on natural and ethical practices.

When applied to wine making, biodynamics utilises several homeopathic-style preparations in place of chemical fertilisers. These are all made in a natural way and are known by numbers. For example preparation 500 is made by burying cow manure in a cow horn for the winter and mixing small quantities of the resulting material in water which is then used to spray the vines. Other preparations include teas made of nettles or the horsetail plant, which are used to feed the vines.

Some people find the mysticism, and some of the practices associated with biodynamics a little unusual or even weird, to say the least. For example, when preparation 500 is added to water, it has to be stirred for an hour clockwise and then an hour anticlockwise, no more or no less. There is also a particular view or mindset that one must adopt while farming in order to access the spiritual world. As Amerighi points out, however, just like yoga, some people adopt a spiritually light approach to biodynamics and others a more spiritual. I am not sure where Amerighi falls on this cline and didn’t like to ask: maybe when I know him better.

Whatever the truth, on arrival at Amerighi’s farm on a sunny afternoon in June, accompanied by my friends from Ottimi Vini, I was immediately impressed with the amazingly lush nature of his land. The vineyards are spread around a central hill, under which the buildings have been thoughtfully constructed, which commands 360 degree views of the surrounding countryside. Buried as they are, the buildings are naturally climate controlled and so there is a minimal use of electricity, another impressive fact which adds to the ecological pedigree of Amerighi’s farming.

He is an extremely affable man, and every inch the hands-on farmer: long, jet black hair and beard, and a tan which betrays the amount of time he spends with his beloved vines. He grows 100% syrah grapes, which experts determined were the best for his land and he picked the rootstock himself from the Rhône Valley in France. In fact, he spends a lot of time in France and seems to be very much part of the growing biodynamic wine industry.

Once his biodynamic grapes are ready for processing, they continue to experience a completely natural method of production. They are pressed in the traditional way with feet, no machines. They are then transferred into concrete vats for fermentation again without the use of machines or pumps. The wine is refined in either French oak or ceramic casks for fourteen months, before being bottled without the use of filters or stabilizers.

The farm consists of seventeen different terroirs, and each one is made into separate wines which are then blended after maturation to make the wine Stefano wants. We tried all seventeen wines as Stefano really wanted to show us the difference that terroir and climate can make even in a small area, and so that afternoon I tried seventeen subtly different wines of excellent quality, each showing off the unique characteristics of the syrah grape at its finest.

Stefano is not a slave to technique, but an artist which shows in his finished wines. But he is also an innovator. He is moving further and further towards the use of ceramic vats so that nothing can add or subtract from the character of his plush grapes. We also saw an experiment using a terracotta amphora, perhaps an effort to recreate the wines of the Ancients. We got to try that as a bonus as well.

Finally, Stefano grabbed a bottle of his 2010 and 2012 wines, some glasses and invited us into his tasting room to sample the finished product. This ‘tasting room’ ended up being the meadow on top of the cave where we sat in the softest grass in Tuscany, cushioned with clover in full bloom and enjoyed this man’s company and conversation every bit as much as the wine. I got the impression that through our reaction and genuine interest in biodynamics—we asked so many questions because each of his answers threw up new ones—he began to relax and see us as potential friends. And it was wonderful to see the man enjoying the fruits of his labours, crushed, fermented, aged, bottled, and poured into glasses.

So what did it taste like? Well the first word that comes to mind is natural. The care to avoid any kind of machinery or chemicals was obvious so what we were tasting was just grape and an amazing, archetypal syrah at that. No tannins, no sulphur just pure, thick, unadulterated fruit.

As the sun started to go down behind Cortona we spotted four perfect white Chianina cows in a paddock amongst the vineyards. ‘Are you branching out into biodynamic beef?’ my friend quipped.

‘No, not at all.’ smiled Amerighi. ‘These are, how you say? Pets! They will live out their whole lives here.’

‘The luckiest Chianina cows in Tuscany then!’

The result of the day was three bottles of Stefano Amerighi 2012 in the cellar at La Madera with a note on them: ‘Not for drinking until 2017!’ I think they might grace my Christmas table then. And on my recent birthday I was introduced to a local restaurant, Agristurismo Mafuccio (of which more in a later post) and there down the bottom of the wine list was Stefano Amerighi 2011. It’s my new favourite restaurant.

Update 05 August 2015: I am delighted that this post was chosen as one of the favourite posts for the Winenot Wednesday Linky Party #11. This is hosted on two fabulous blogs: The Willunga Wino and Champagne and Chips both excellent sources of wine info and run by really lovely people. Thank you! 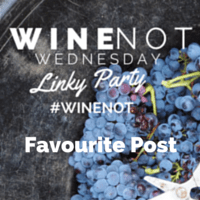